The woods are a special place at any time of year, yet there is something extra-special about woodland in Springtime - and the children pick up on it.

The transformation of trees from seemingly lifeless and static lumps of wood into swaying giants of green; a sea of vibrant Bluebells carpeting the woodland floor where previously the colours had been so muted; and obvious signs of new life - the cracked remains of a bird's eggshell, snails and slugs setting out on their journeys across the woodland floor and plants so much higher than last time (especially the nettle - always ready to 'remind' the unwary of its itchy and painful touch.

Once again we had our pedagogical consultant Deb Wilenski with us. Deb will be picking up on certain themes which the children explored during todays's Forest School when she comes to the Montessori Room next week to work with Miss Ramm. 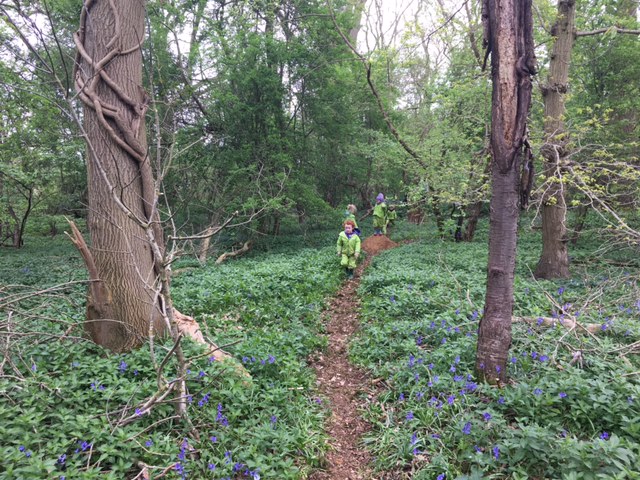 The Bluebells welcomed the children as soon as they stepped over the woodland threshold. A few narrow strips of brown path wove their way among the thick swathe of this purply-blue flower. It was interesting to see the different reactions of the children. Some stood, looking down the narrow path, yet somehow reluctant to step into this new landscape; while others ran confidently straight in, heading for the mysterious mound which they discovered in the rain last month. This time it was hard and dusty and George, Arthur, Darcey and Eva spent a great deal of time discussing what it was - "There's a wolf inside! It's a bad wolf!" - and poking it and banging it with sticks large and small. They were enjoying the different feel that it had this time - it was easier for them to climb up now that it was dry and it gave a hollow sound when they hit it with a stick.

Esther and John decided that we would take a different route to camp today and so we used the path we normally walk back to the bus on to head deeper into the woods. This gave an excellent opportunity for a picnic in a clearing with some felled trees making excellent benches. Right beside us was a very strange looking dead tree which attracted there attention of some of the children.

"That's a funny tree. What are those bear scratches?" asked Poppy pointing at the strange tree where some of the bark was missing. 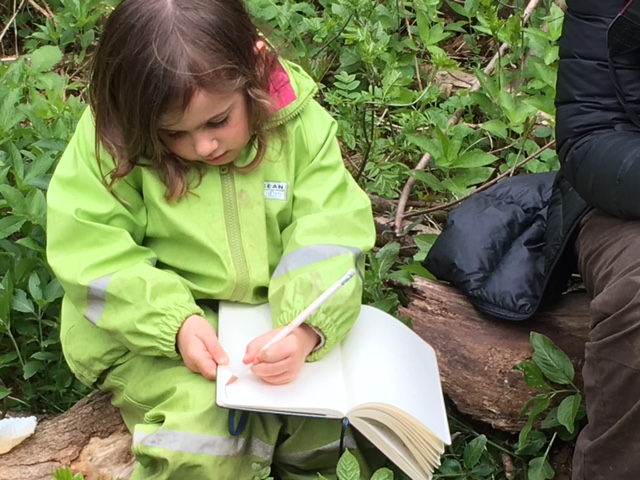 Deb had her pencil and notebook with her and Darcey began to draw the strange tree, really picking up on the strange stubby branches and its flat top. The notebook and pencil would be very well used for the rest of the session. John mentioned his trap that he had made at camp a few weeks before and some of the boys became keen to move on and see if it was still there, so we finished our lunch and pressed on.

This group has seen slugs before but this time their reaction was very different. They came upon a large slug right in the middle of the path. They showed immediate concern for the slimy, black invertebrate and decided to build it a house - there and then - to protect it. They busily collected sticks and covered the slug. "You can't see the slug now," said Georgia.

"I've got some grass to put on him," said Darcey.

"We need lots of grass," said Darcey and Eva, Arthur and Charlie joined in, collecting grass and laying it over the slug's house.

"Before he eats them all," said Charlie.

"If he eats it all he'll get bigger," replied Darcey.

"And we have to jump over like this," said Georgia, hopping over the slug's house.

It was a lovely interaction to see. The children were clearly concerned for the slug and were worried about it being trodden on in the middle of the path. 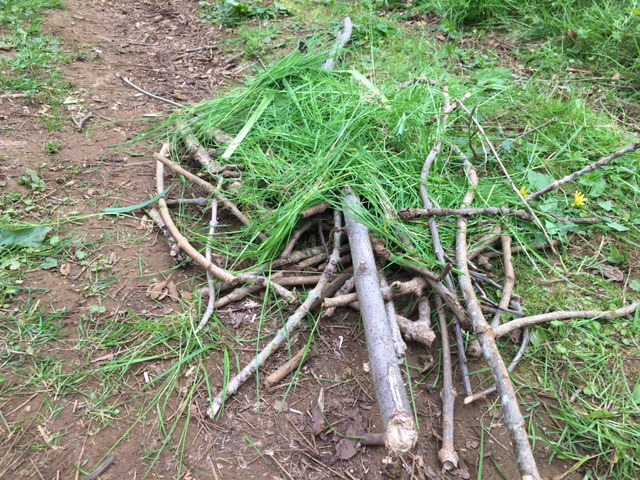 Before they moved on, Georgia placed her hand gently on the house and said "it's a sleepy slug." They all showed real empathy and went to a great deal of effort to help this small woodland dweller.

The children diverted back on to our usual route and so they came upon what they call 'The Ogre's Bath' - a dip in the path which is usually wet and very muddy and the scene of many a lost boot! But this time it was bone dry. They walked in and prodded the bottom with their boots, testing the texture of the ground and they were a little disappointed with what they found.

Edward commented on the Ogre's situation. "Poor ogre, he's going to smell smelly! We need to help him make a big bath."

Darcey let out a sigh. "This slope is broken. Now we can't squelch in it!" And so it was on to camp. 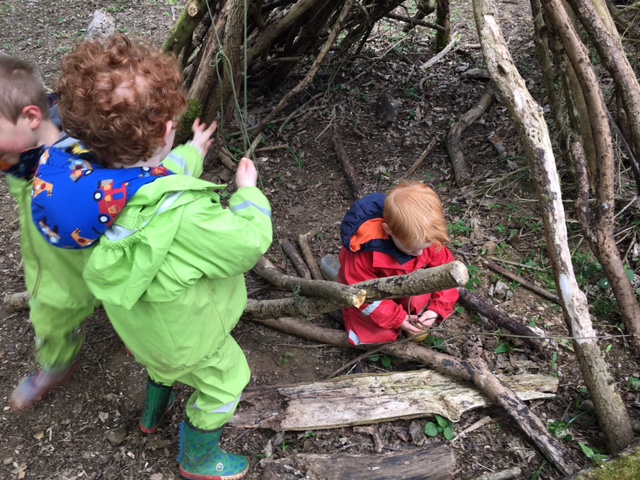 The boys found only a tiny bit of their trap still there, so we provided them with some more cord and they set about rebuilding their trap, making a sort of pulley to lift a large stick. They worked with real focus and only very occasionally needed to ask for adult help.

Someone had obviously had a fire there since our last visit and Deb collected some of the charcoal and sat down. She was soon joined by Rosie, Charlie and Darcey who were clearly intrigued by these dark-coloured objects which made their hands dirty. With some very light-touch facilitation by Deb, they soon discovered that it could make marks on the logs around them and also work like a pencil. They also mixed it with water and made wonderful markings on the log next to them and in Deb's notebook. I don't think they moved for an hour or so! Deb is going to explore this further with them next week, but the engagement and interaction was incredibly powerful. 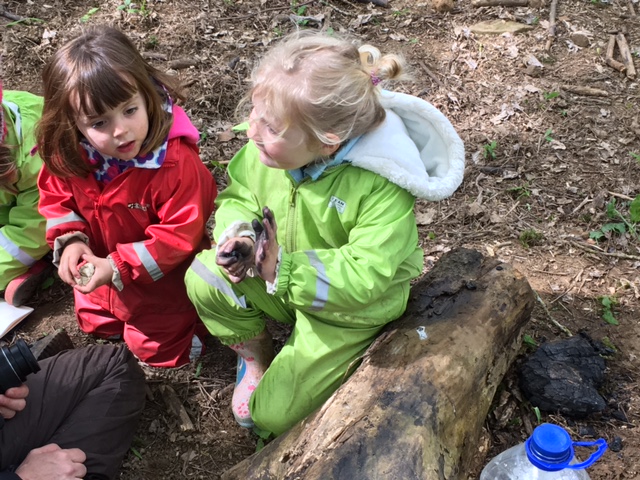 There was just time for some brave jumping from a tree stump from Patrick, Eva, Poppy and Esther and a visit to our old tractor before the bus back to TCG beckoned.