You see the full extent of nature's capacity to enthral and engage children when winter has stripped back the forest to its bare bones.

When the weather is cold; there are a few spots of rain in the air and the wind has an icy chill to it. Surely this will dampen the children's appetite for adventure and see them asking for a return to the centrally-heated classroom?

Far from it! With very little greenery and growth, the bare wood offered up new and exciting opportunities for the children to interact with. The chance to move away from the path and work their way up the side of the wood - clambering over previously unseen logs and ducking under branches bare of leaves. Damp and decaying tree stumps offered fresh interest - to be poked and prodded with sticks; laughing as chunks of the rotten timber fell away and then wonder at the creatures they discovered inside. 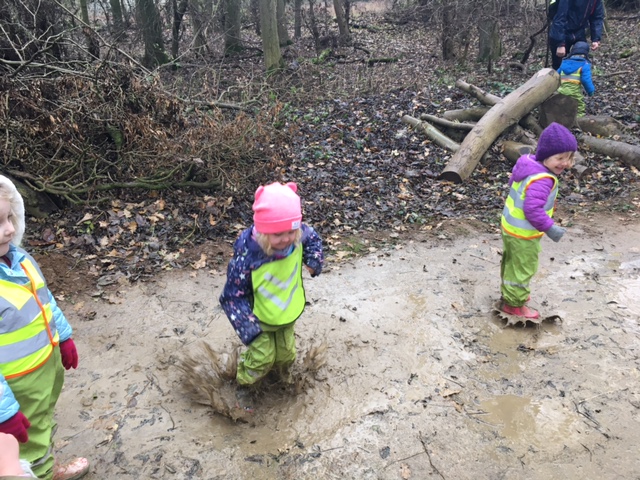 And then there were the puddles. Children are fascinated by puddles. When those puddles are muddy - even more so! Some fresh puddles on the track gave them the opportunity to repeatedly jump and down, marvelling at the brown water being thrown out around them and onto themselves and their friends. Some of the group then graduated to jumping from a hump at the side of the track into a puddle - testing their resolve and how far the water could splash. 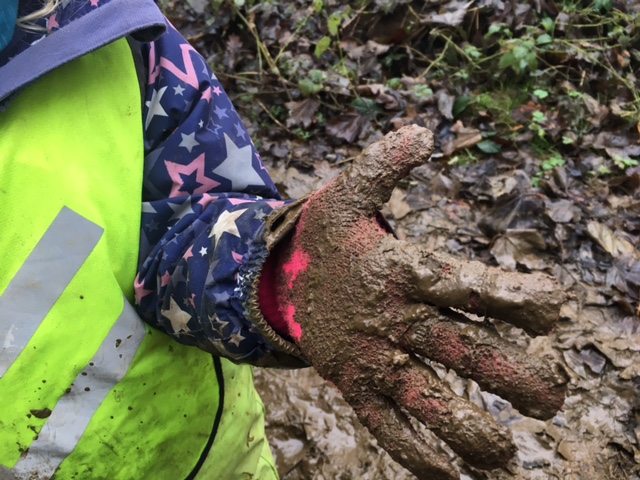 Our mud hole is becoming more like an African water-hole after a thunderstorm with every passing visit. Our previous bridge of sticks had completely disappeared into the muddy depths so we tried, with only some success, to build a new one. The children renewed their exploration of the mud hole with gusto with lots of shouts of "I'm stuck!" "My welly's stuck!" It was interesting to see their reactions when they stumbled and ended up on knees or bottoms. They seemed to relish the covering of their outdoor clothes in mud and were intrigued in the change to their hands and gloves. Some of the children were more tentative, dipping their boots into the mud - yet a big choice for them to actively choose to do this - while others, quite literally, rolled around. They seemed to revel in an experience which doesn't present itself to them very often - the opportunity to engage completely freely with nature at its dirtiest.

The children have often introduced animals into their creative play in the woods. We've had foxes, badgers and even elephants! However, this time the children became a pack of wolves (with some help from Hayley!). They ran around and called to each other with full voice! The wood was filled with the sound of a large pack of wolves! They loved the freedom of being able to be really loud and be sociable at the same time. Some of the wolves were related to each other and so it ended up being a cross between 'mums and dads' and the wolf pack!

This same energy came bursting out of the children once again when it was time to get the camp fire going - and they called for the dragon (still inside my tummy apparently!) as the flames went higher. The fire captivated them as they ate their sandwiches, particularly the changes in colour as the wood burned - reds, oranges, yellows and then white. "I can see inside the fire," said one. 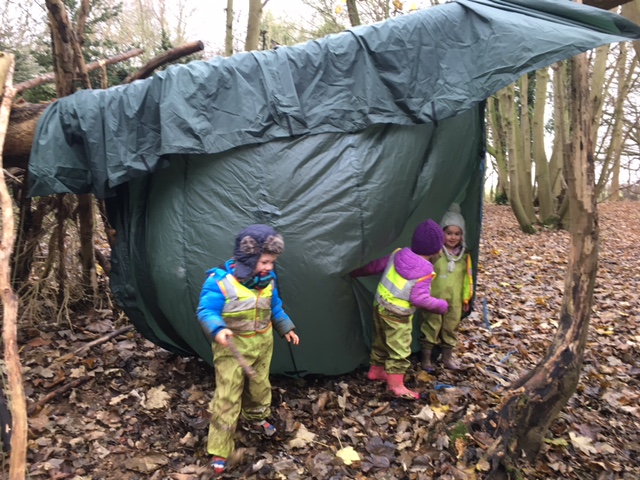 There were one or two cold hands so we brought out the hot chocolate and rigged up a shelter so those who wanted to could escape the wind - this became another source of delight for the children, running in and out, enjoying the feeling of being covered by the material. It was a trap one minute and then an aeroplane the next. "Where are you flying to?" I asked. "To the beach!" came the reply.

Each Forest School Experience adds another small piece to the children's development as competent and capable individuals, another element of understanding risk, another closer connection to nature. It also offers the adults learnings too - especially to remove their gloves BEFORE they get stuck into the mud hole!