One of the most rewarding aspects of Forest School is how, despite going back to the same place time and again (you could say because of it), we discover places, paths, creatures (both real and fantastical) and other items the woodland has decided to share with us.

This week the children struck off across new paths laid bare by the newly-felled trees - some appeared to be made by digger tracks, others looked more like animal tracks. To the children though they were 'tracks made by baddies'! "There's a baddie cave at the end of this track, let's go and find it!"

Their desire to explore and go off the well-trodden path is increasing with each visit to the woods. It is always so much easier to stick to the path we know - familiar, safe and comforting. However, our Forest School children are forging new directions for themselves and being rewarded for their endeavours - a new climbing tree, a never-before-seen hole, a chance encounter with a huge worm.

It was this sense of adventure which led directly to our great discovery.

Moss and Arthur were exploring the outer edges of our camp area and 'hiding' from the adults.

We could see them through the bushes and hear their excited chatter - "Can you hear the Monster coming?". They clearly wanted to explore further afield and so we kept our distance to see where their thinking would take them.

They ventured over to a part of the wood we had not been into before, despite it not being far from our camp. It was there that we stumbled across something we did not expect to see, hidden under some bushes - an ancient 1940's tractor. Its large studded metal wheels and chassis lying like a carcass on the ground. Our excited chatter soon drew more children to where we were and I stood back to see how they would process what they had found.

"It's my old tractor I used to ride!"

"We need to get some things for it to make it move!"

"Does it need petrol, does it?" 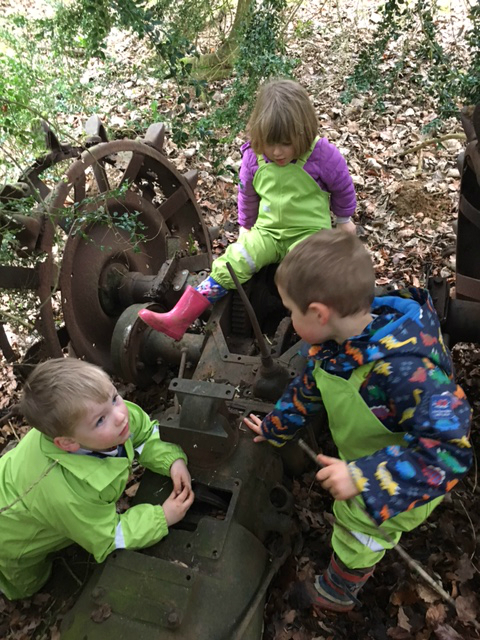 They swarmed over it, pulling the levers, poking their sticks into holes and taking turns to sit where the seat would have been. As they know what a tractor is - and have seen them before on the roads or in the fields - I could see they were grappling with the more practical questions of 'can it move' as well their imaginations, by pretending to be mechanics filling it with oil and petrol.

It was such an important discovery for the children that it will be interesting to see how it influences our future visits. Recently, a group of boys have been repeatedly creating 'traps for the monster' back at our base camp, while a group of girls have been building a 'mouse house' out of sticks and mud. A great deal of effort has gone into these and we will be following these in more detail in the next visit. But, for now, today was about the unearthing of something special - an ancient tractor in the woods.