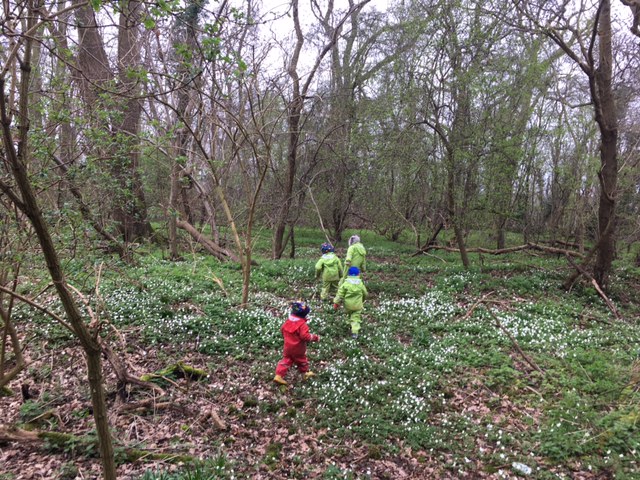 How often do we, as adults, impose our own perceptions of the everyday world around us on to children? The answer, particularly as a parent, is frequently. We do this because we see the world through our own eyes and so our own, generally more practical, considerations come to the fore.

If it’s raining we seek shelter.

If it’s muddy we try and keep our clothes clean.

If I know I have a hole in my boot I’m not going to stand in the puddle.

Too easily, we project these well-meaning, but ultimately, constraining thoughts and ‘advice’ on to the children around us. Because, as adults, we have already ‘discovered’ the world haven’t we?!

Yet it is vital that we enable our children to discover the world for themselves, through their own eyes, for they are not yet clouded by ‘grown-up’ thinking. At TCG, we are striving not to cast an adult shadow on the children’s experiences, yet still be there as a support for them if needed and to ensure their safety.

This was, hands down, the wettest Forest School we have ever been on. It was also our pedagogical consultant Deb Wilenski’s first day at TCG and she came with us! We had only been a few minutes in the wood when a heavy burst of rain came in. We erected a temporary shelter and crouched underneath. Our first reaction as adults was to try and chivvy all the children under the shelter. Yet some of them were clearly relishing being out in the rain and they were engaging with the environment differently because of it. Just being in the rain gave the children an even greater sense of adventure and a feeling of being in and part of nature.

We were, once again, in a part of the wood we had never been to before - the children had been drawn in by a carpet of white flowers, which are not usually in bloom. They soon discovered a large tractor tyre.

“It’s from our tractor!”

They had to balance carefully to walk all the way around it without falling off. 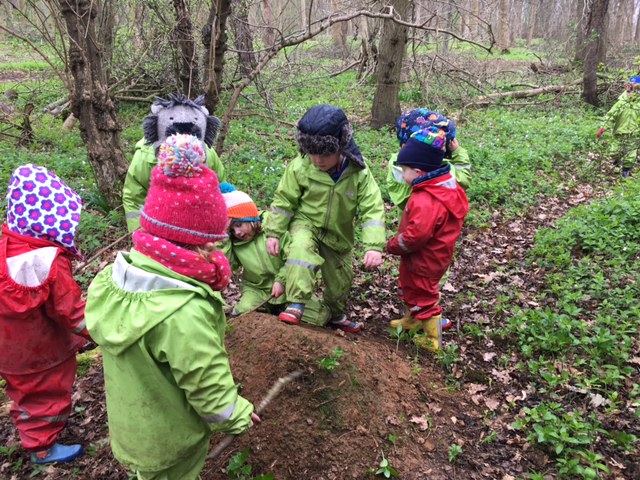 Soon excited shouts drew us further along the path to a strange lumpy mound about 18 inches high. The children chatted among themselves as to what it was and who or what had made it. Then sticks were found and investigations began. They poked and prodded and were clearly loving touching the sticky, wet mud with their bare hands. The rain made the mound very slippery indeed and it became more and more of a challenge for the children to climb to the top and stay there. Wellie boots slipped and down they slid covering their Forest School suits in mud!

The heavy rain topped up the puddles on the track and proved too much of a draw for some. They jumped with real gusto, splashing down in the puddles, enjoying the sensation of the water splashing everywhere including on them. Their coordination and confidence was lovely to see. And yes, one or two discovered that if you have holes in your wellies then your feet can get damp! Yet they discovered it for themselves and so it had much more meaning than simply being told by an adult.

Storm Doris, which some of the children were aware of, had left its mark on our wood. There was lots of tree debris on the woodland floor and then, dangerously close to our Treasure Tree, a large tree lay on its side, with the bark peeled back and the roots poking out.

George and Darcey had a conversation about whether this was the Treasure Tree or not. When Darcey pointed out that the precious Treasure Tree (home to the geocache we found 2 years ago) was close by George ran to see if it had been damaged as well. Thankfully all was well.

At camp we rigged up another shelter and had our lunch (rather late as the children had been so busy in the rain). Then it was time for some of the children to show Deb and Charlie and Jacob (who had not been to this site before) the tractor we found last time. Arthur, Edward and Darcey led the way and there was a great deal of discussion about how to get the engine running and the tractor moving.

“Maybe when you get the oil thing in I’ll be able to drive it,” said Edward climbing aboard.

Sadly, all too soon, it was really time to go, with the sun beginning to peek through the clouds at last. 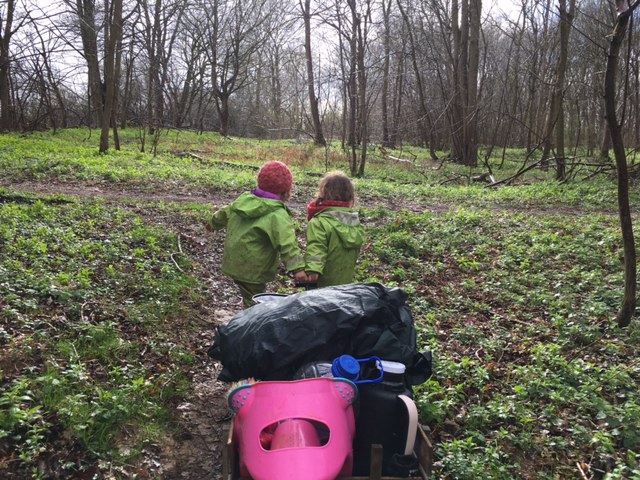