This energetic and inquisitive Forest School group are clearly onto something.

We went to Forest School 'Site B' and I was interested to see if they continued with any of the 'themes' they had been exploring in our usual Forest School location, which they are so familiar with.

Sure enough, a giant chunk of a fallen tree trunk was almost instantly identified as a 'monster'.

"This is a monster!"

"Shall we clean it off?"

Some of the children then sought out appropriate sticks to poke and prod the holes on the side of the monster.

"We're digging all of the monster stuff out!" As they pushed their sticks into the holes and dragged out the damp sawdust.

"That's what he eats! He eats the muddy stuff!"

The group swarmed around 'the monster' - clearly not frightened by it, and yet still exploring scary themes. Then they began to clamber up onto its back. Six months ago, most of them would have instinctively sought out adult help to climb up. Now, more than half-way through their Forest School programme, many of them climbed up without asking for help or, merely needing a handhold pointing out. The sense of achievement on their faces when they reached the top of the monster was lovely to see and totally justified - "I getted up!"

Most of them became deeply engrossed in the challenge of climbing, jumping down and climbing back up, but new girl Charlie, together with Darcey, were fascinated by the monster's holes and wanted to spend more time exploring them really closely.

"That's his mouth and he can bite you!" pointed out Darcey, at the biggest hole on the 'monster'.

"He's really bad and he can bite!"

But Charlie was more than happy to put her arm all the way into the monster's mouth! Followed by giving it a good clean out with a stick because the sawdust 'made the monster choke!" Very brave!

One of the great things about our alternative FS location is that it offers the opportunity for the children to interact with slopes - and they really did enjoy it! Observing them, and allowing them to lead the way, it was so clear that they were drawn to wanting to reach the top of something they were at the bottom of (similar to wanting to climb onto the monster). They relished the challenge of negotiating the steep slope and we gave them plenty of space to minimise the adult input their achievements.

Of course, once they were at the top, they wanted to explore different ways of going back down! Sliding, walking, rolling, running - whichever method they chose we could see they were loving the interaction with the carpet of old leaves left over from the autumn; still quite scrunchy despite the recent wet weather. 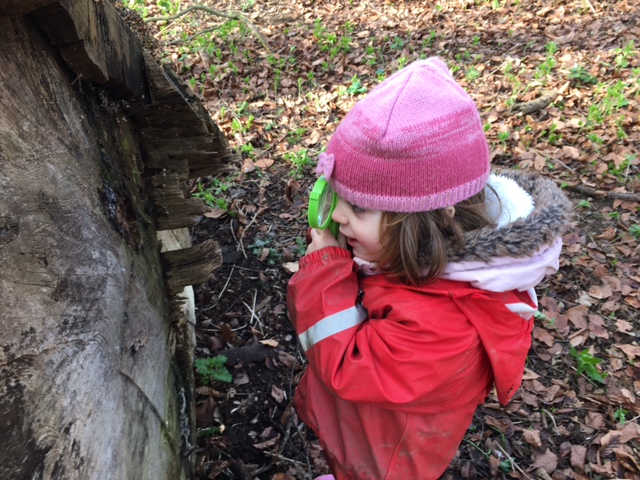 Sitting down for a snack break, a few of the children noticed the first green shoots of the year poking through the brown woodland floor. So out came the magnifying glasses to look more closely - they loved seeing things bigger than their eyes normally saw and it really encouraged them to get right up close to plants and logs and to wander off the path in search of a new discovery.

A snapshot of how this group of children is bonding came on the way back. I have never before seen 8 of them, working together to navigate the trolley (laden with sticks to play Pooh Sticks on the walk back to TCG) up a muddy path and around a fallen tree. There was encouragement, orders being given and real concern being shown for one of them who was being left behind. No adult input at all. 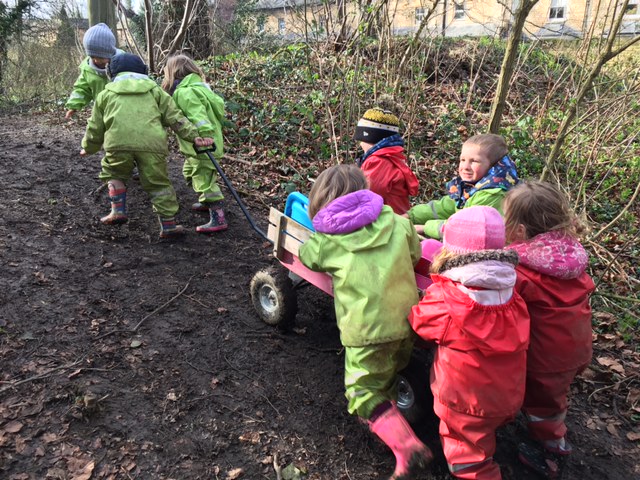 This is what Forest School is all about.