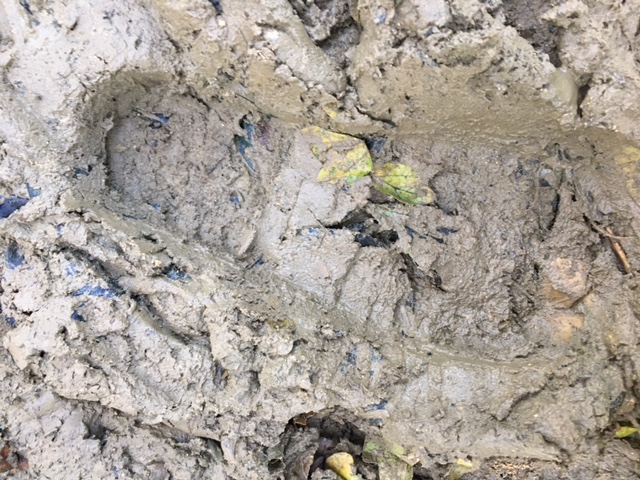 This week our wonderful wood was right on the cusp of leaving Autumn behind and embracing winter's cold embrace. This constant evolution fascinates the children and offers them countless ways to interact with their environment and truly experience nature up close.

We had three key themes - two provided by nature: mud and leaves - and one by the adults: fire. All three, combined with the children's bountiful supply of energy and enthusiasm, created a very special Forest School Experience.

What is it about mud that fascinates children? They revel in its many qualities - dry or sticky, pliable like soft clay, it captures imprints of what has been over it such as a footprint, animal track or a tractor tyre. I think they also rather like it because it's 'dirty' and children are so used to being in clean environments. 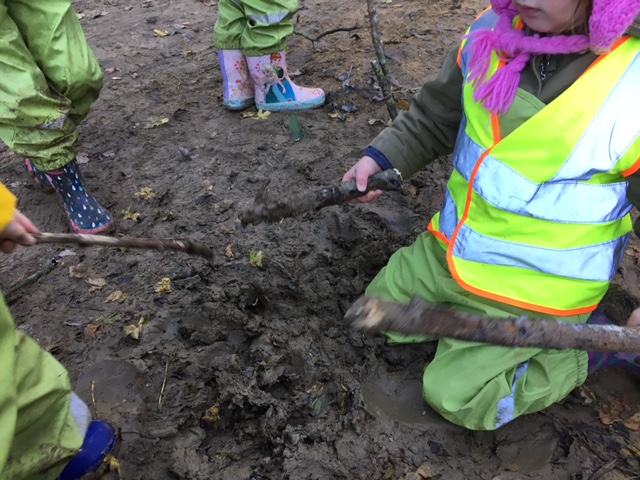 Once again we had only made it a few yards into the wood before the children were absorbed by what nature had conjured up for them. One muddy section of track drew them in. Firstly they stood in it. Then they jumped up and down. Then they poked and stirred with sticks. Then they could feel the mud pulling at their boots as they tried to jump. Esther noticed that she could see the outline of her boot in the mud when she lifted it up - even the lines of the sole. She was very taken by this.

"I'm stuck!" Came the first shout. Shortly followed by another and another.

It was fascinating to see how they pursued this theme of being 'stuck' or 'trapped' between themselves. Charlie and I could see they weren't really stuck, yet they were pretending with each other that they were. What is it about the sensation of being 'stuck' and yet, at the same time, knowing you can get yourself out of it, that appeals? It seems to me that they were exploring feelings of risk in a safe and social way.

Further up George spotted a large dip in the ground which was deep with fallen leaves. Leaves were still falling from the trees and they shouted out whenever they saw one fall close by and tried to catch them (harder than it sounds!). The combination of sloping ground and leaves of almost a foot deep gave them a lovely soft ramp to roll down. One or two found it hard to roll down and went more across the slope at first but they soon mastered it and went back for more! 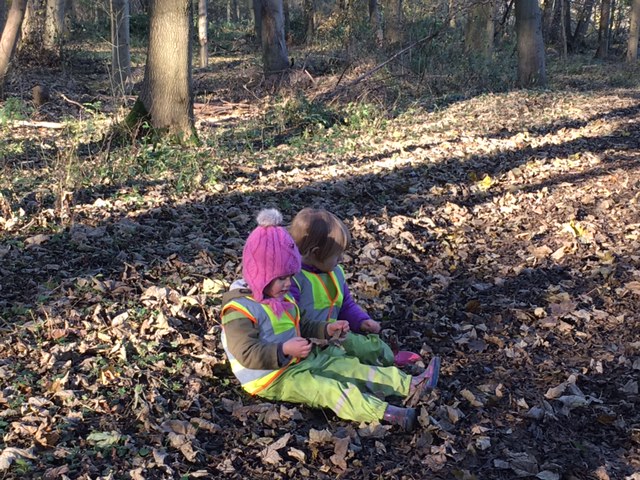 Having reached the bottom and, clearly enjoying the sensation of lying on a mattress of leaves, they began to cover themselves - and each other - with a blanket of leaves. "I'm cosy!" It was interesting to see the children who were standing up and doing the covering seemed to take on the role of parent. "Are you going to sleep now?" and "Night, night!" While the one lying down was the child. They really enjoyed having someone 'look after them'.

There is one spot in the the wood that was previously known as The Ogre's Bath. The Ogre is not part of this group's experience and so this muddy dip has become an unnamed place where they can test their resolve and dexterity in really wet and sticky mud. In previous weeks the children had laid sticks across to form a bridge, but it was so muddy that the 'bridge' has started to sink in itself. The children were so animated here. "Oh no, the bridge is sinking!" "Abandon ship!" "It's really super muddy and sticky!" And then, unlike the earlier muddy encounter, they really did become stuck. Wellies became dislodged from feet and they were soon on their knees and bottoms in the mud. Once again, they seemed to enjoy this feeling of putting themselves in mild peril. Mostly they could extricate themselves, but adult help was required to retrieve the odd wellie! The children have never been so muddy and so happy (is there a correlation here?

Click here for the stuck in the mud video!

Despite the sunshine, it was a cold day in the woods so Charlie and I prepared the camp fire. The children had all grasped the understanding of moving around a fire square safely at our previous practice session and so we knew they were ready for this next level of responsibility. As the fire took hold, I had to occasionally kneel down and blow at the base of the fire. The children were fascinated by the sudden change this action caused in the fire. It glowed bright red and then the flames burned higher. Apparently, I had a 'dragon in my tummy'! I embellished this lovely idea with the occasional dragon noise after my blowing and soon the children were calling for the dragon every time the fire needed a boost - "One, two, three where are you dragon?"